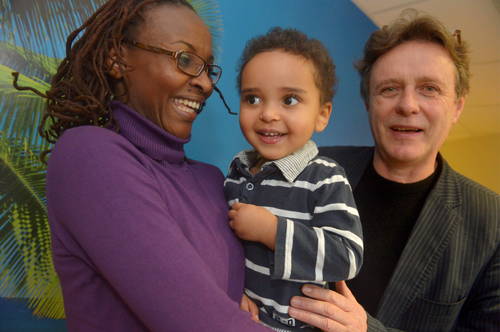 After the war in Kosovo, she found herself travelling from Kenya to Serbia to help in the rebuilding of the nation as a humanitarian volunteer. What started as a simple trip led to a whole new journey to her life.

The sassy 40 year old, mother of one, Ivy Kinyanjui sits relaxed in her home in Eichsfeld sharing about her experience and how she landed in the village. She met her husband, Axel Thunert, while living in Rome where she had moved to after her work in Serbia. It wasn’t long before she moved to Eichsfeld to be with her husband who runs several travel agencies in Uda and Heiligenstadt.

After her maternity leave and her son joining Kindergarten, she went back to school to learn German. She has been learning Germany at the Kreisvolkshochschule in Heiligenstadt and even admits to thinking in German, but she maintains that her dreams remain in English. She plans to raise her son, Henry, as a bilingual speaking both English and German, she explains in fluent German.

The trained HR Manager has been doing an internship at the Landratsamt in the Unstrut-Hainich-Kreis which she got through the Volkshochschule in Mühlhaus. She hopes she can eventually get a job after the internship.

On feeling at home in Germany? “I can’t complain. I’m happy”, though she adds that it takes time to feel at home mainly because she spent most of her life in big cities and Eichsfeld is such a tiny village and this requires a bit of an adjustment. The German weather also takes a bit of getting used to but isn’t much of a problem for her. “I love winter”, she says, “Snow is amazing”. She doesn’t mind dry cold weather but for the wet cold weather she says, “That’s what I’m going to probably never get used.”

“Kenya remains my homeland”, she adds as she reminisces about her relatives back home in Kenya. She hopes to be able to visit her relatives at least once a year, she knows it could be difficult to do so with a job and a family but she hopes she’ll be able to plan her life well enough to make time for it.

In December she took her husband and son to Kenya for the first time, which was an amazing experience. “We had a lot of fun”, she says as she pulls herself back to the interview. For Henry it was quite an experience meeting strangers who he later found out he was related to.

She’s not sure what is going to happen next, but she remains optimistic about having a future in Germany.