The project that showcased pictures of people living in Potsdam-Drewitz who stand out. The project aims to have these people share their stories. The project actually known as “Kenn Ich!?” was showcased at the Oskar Drewitz. (www.oskar-drewitz.de)As part of the project a Kenyan was featured, her name is Diana Atieno Otieno from Potsdam. From her story she says:

May I introduce myself?

My name is Diana Atieno Otieno. Where do you know me from? Maybe from the Kita Fairyland. You might have seen me narrating African fairy tales at the Kita. Or maybe at a Festival, where you’d have seen me performing with a Kenyan dance group. Or maybe I just caught your eye along the street and you wondered, “Where does this lady come from?”

My motherland is Kenya. On 12th November 1987 I came to the world on the port city of Kisumu as the daughter of a soldier and a nurse. I belong to the Luo tribe that includes more than 3 million people. The special thing about Luos is that we don’t have heirachial differences based on age. Also, our names have special meanings. We’re named based on how, when and where one was born. That’s how I got the name Otieno, which means “born in the night”.

In 2007, I came to Germany as a refugee at the main refugee station at Eisenhüttenstadt. There was no future for me in Kenya, especially because my parents wanted to force me to get married to an old man. I ran away. Today, two of my brothers live with their families in Nairobi. I was able to see them again after 5 years.

After living in Eisenhüttenstadt for three months, I was able to move to Berlin-Prenzlau. I lived there for 2 years. I moved to Potsdam in June 2010 and lived in Stern. Because my daughter was going to the Kita in Derwitz and most of my Kenyan friends live here, I decided to move to Derwitz end of 2010. I met my current partner in Potsdam. He comes from Nigeria. Although we’re not married we have a wonderful son together.

I trained as a tailor in Kenya but assisted my mother during births. When I got the chance to be trained here in Germany, I trained to be nurse’s assistant. I work 30hrs a week. I’m very grateful for all the support I’ve gotten from people here in Germany. I had many trying times especially with the bureaucracy which can be quite complicated for emigrants. Considering I’ve experienced a lot of goodness, I’d like to give back. That is why I am committed to a cultural and tolerant coexistence.

So the next time you see me, simply speak to me.

You can read the original below: 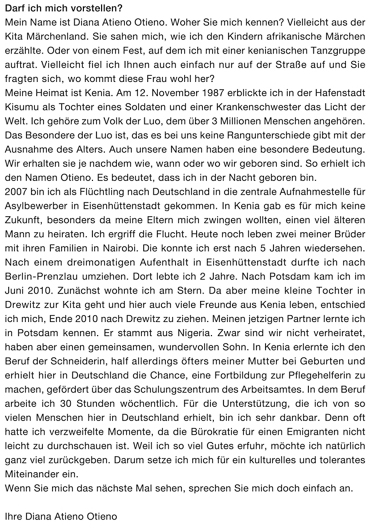