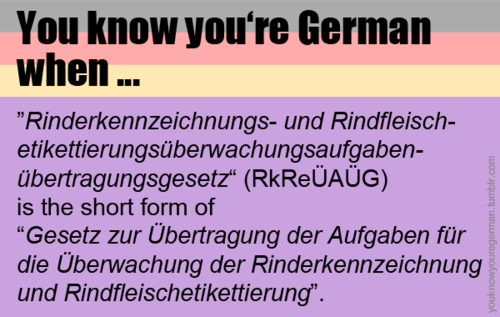 1. With four cases, three genders and the plural, there are technically 16 different ways of saying ‘the’. And to make things more complicated, certain prepositions (i.e. with, for) often change the ‘the’ again. Luckily in true German fashion, there are pretty regular rules for learning these.

2. A similar situation exists with adjectival endings. They change depending on gender and sentence structure. If in doubt, mumble enough so no-one can tell whether it’s an n, m or r at the end.

3. More gender problems. Different genders of the same word have different meanings. For example die See is a sea, der See, is a lake.

4. German is famous for long words. In reality, most of them are just lots of words smashed together, so breaking them down helps. The longest word in German was ditched in July, but there are plenty of others to keep you busy, for example Donaudampfschiffahrtsgesellschaftskapitän, which translates to the captain of a steamship on the Danube.(Read: Death of longest German word)

5. Faux Ami – Every language has them and German is no different. False friends are another trapdoor of confusion lying in wait. For starters, a Beamer is not a BMW, but an overhead projector.

6. You or You? This is always a point of contention for English speakers who sensibly ditched the informal version of you, thou, centuries ago. The Germans keep the tradition going though with two forms for singular you, du (informal) and Sie (formal). If in doubt use Sie and wait for the German person to address you as du.

7. Where does the verb go? While in English you can get away with sticking a verb pretty much anywhere in the sentence, German has strict rules. The verb comes second in a basic sentence, but certain conjunctions – like weil (because) or specific structures push the verb all the way to the end.

8. Bureaucracy remains a bastion of the long indecipherable word, and while getting your head around official vocabulary can seem daunting, it is an important part of German life. One particularly strange example, Bezirksschornsteinfegermeister equates to something like head chimney sweep for the district.

9. You’ve done the hard prep work, made the effort to learn the language and ask a stranger a question in German. The reply comes straight back to you – in English. Germans are proud of their English skills and like to speak to practice it with you. If you’re going to improve you will have to insist on speaking German.

10. Well done, you’ve read the books, listened to the tapes and mastered the German language. Now it’s time to pack up and visit the country… and discover half of Germany speaks a regional dialect. Back to the drawing board!

Courtesy of The Local