Welcome to the second edition (2013) of our quarterly E-Newsletter. We look forward to receiving your feedback. 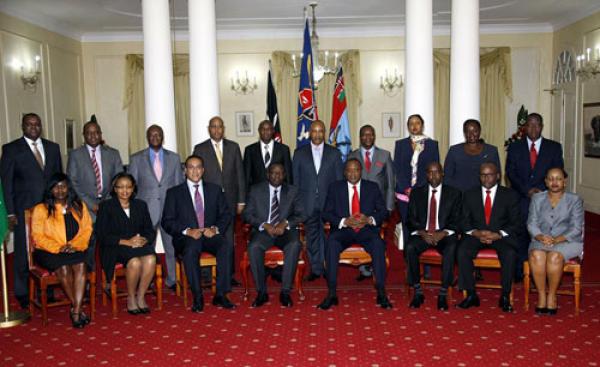 The following is the full list of the Cabinet Secretaries:

The year 2013 marks the 50th Anniversary of the formation of the Organization of African Unity, which gave way for the establishment of the African Union.

The 50th Anniversary of the African Union was marked with various activities and events by African Missions in Berlin. 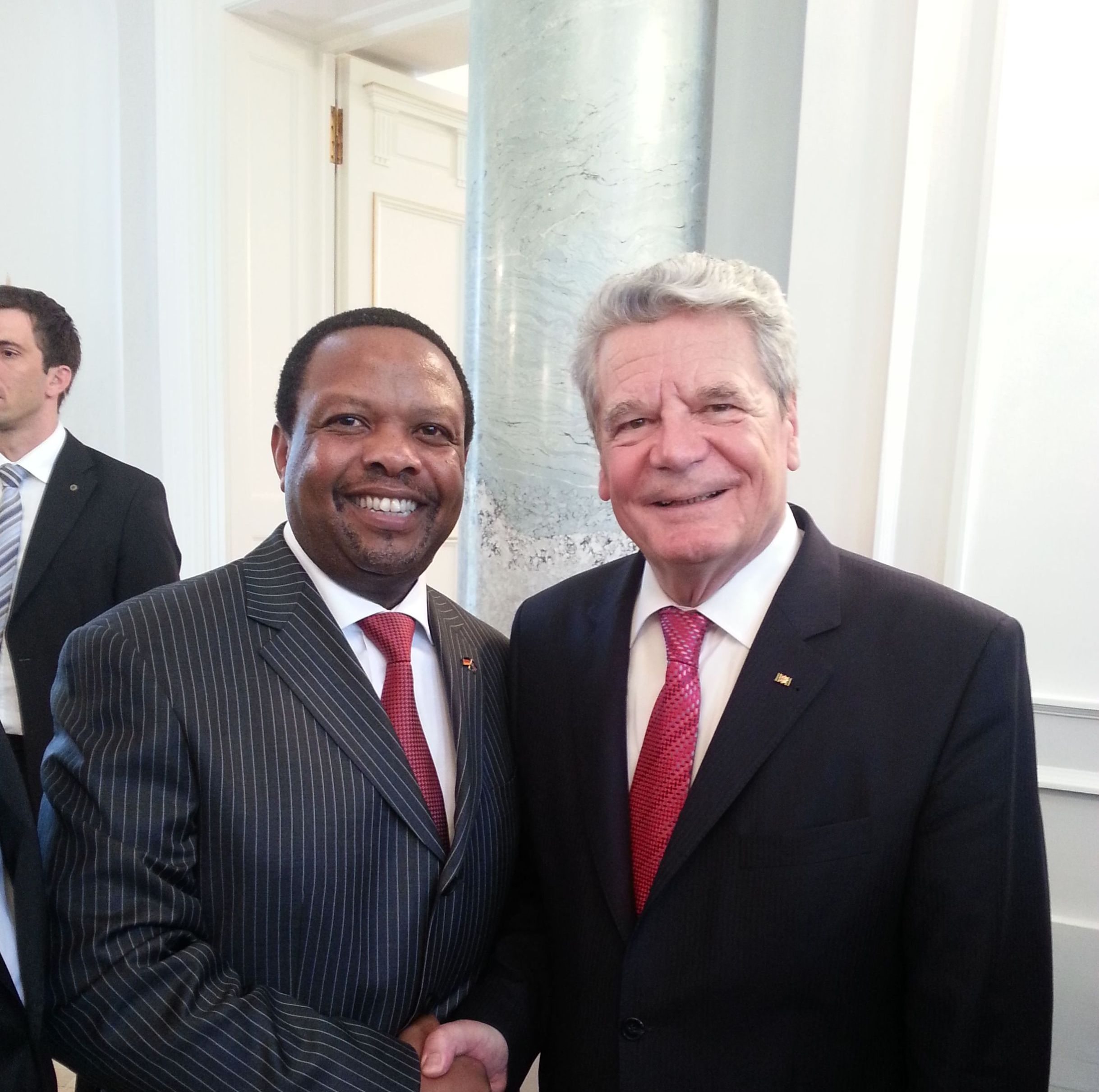 The African Ambassadors Meeting, held at Bellevue Palace, the Official Residence of the Federal President, marked the 50th Anniversary of the African Union.

H.E Joachim Gauck, President of the Federal Republic of Germany, with H.E. Ken Osinde, during a Meeting with African Ambassadors on 24th May, 2013, in Berlin. 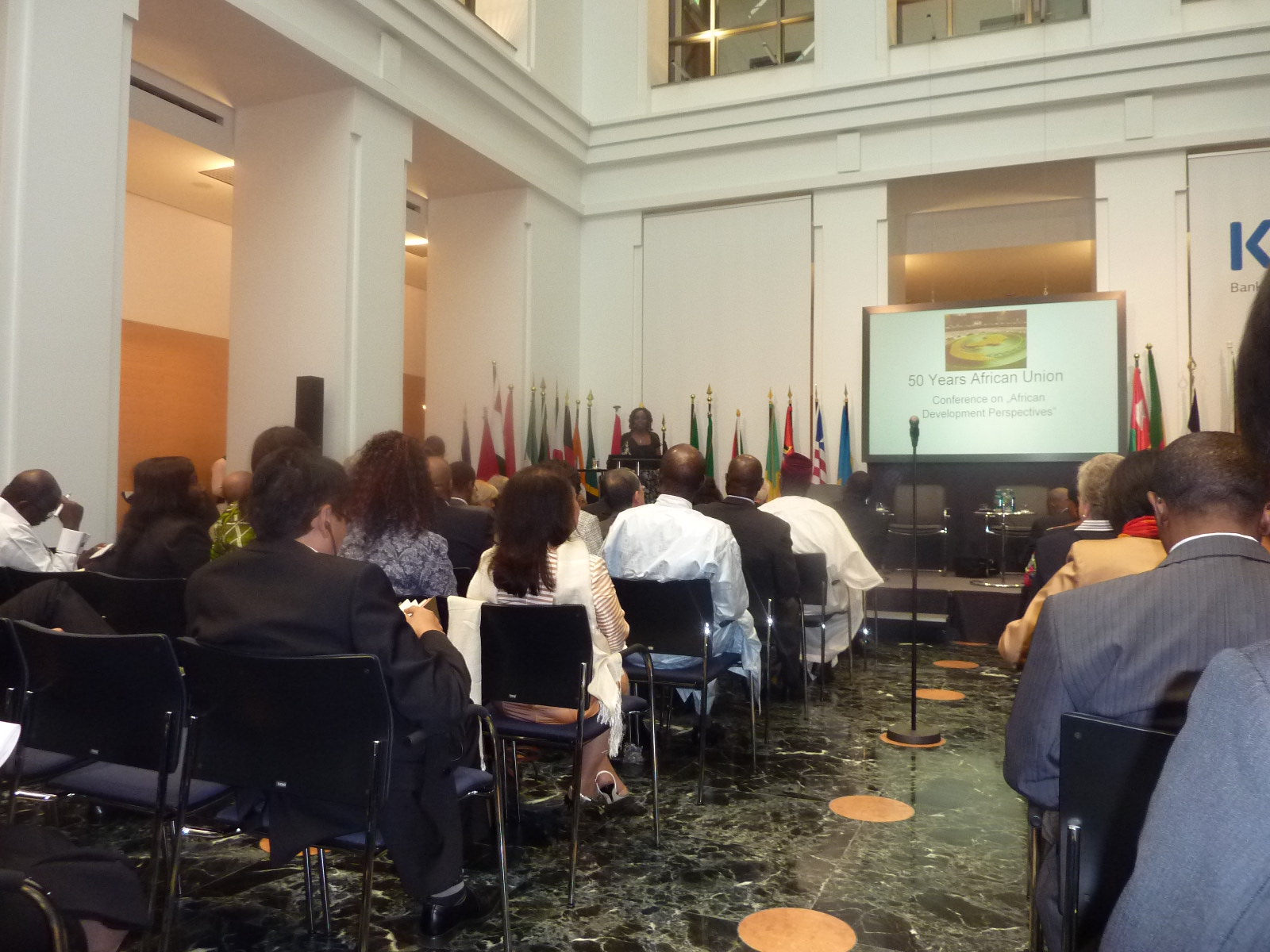 The Kenya Embasy Berlin together with other African Embassies in Berlin celebrated the 50th Anniversary of the African Union with a Diplomatic Reception on 21st May, 2013.

Guests keenly follow proceedings during the Diplomatic Reception hosted by African Diplomatic Missions in Germany on 21st May, 2013, at the KfW Building in Berlin. 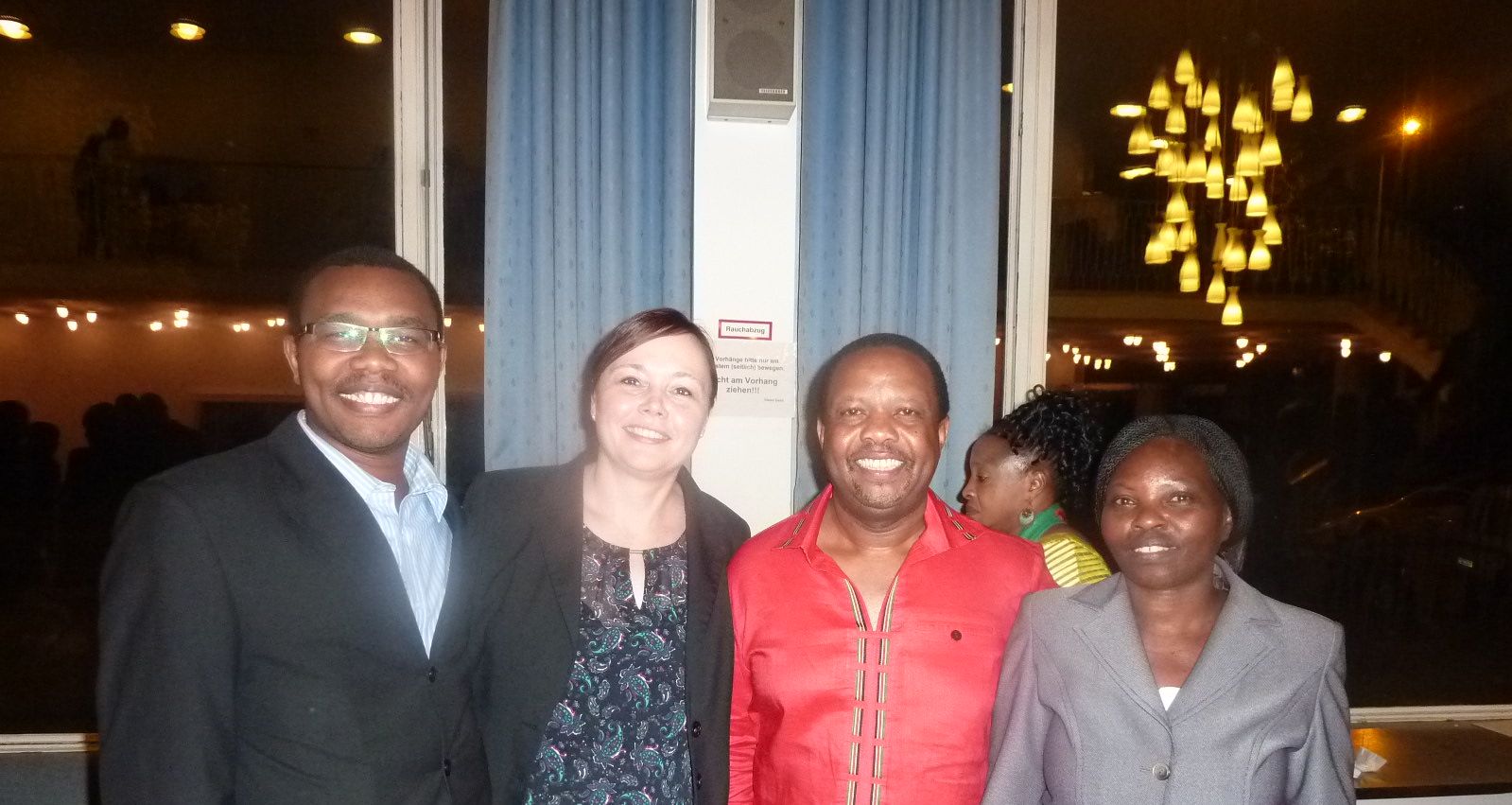 The Diaspora Day celebrated the rich and diverse cultural heritage of African countries. The event saw public performances by different African musicians and dancers followed by an African Cuisine Reception.

Meeting at the Official Residence of the German President 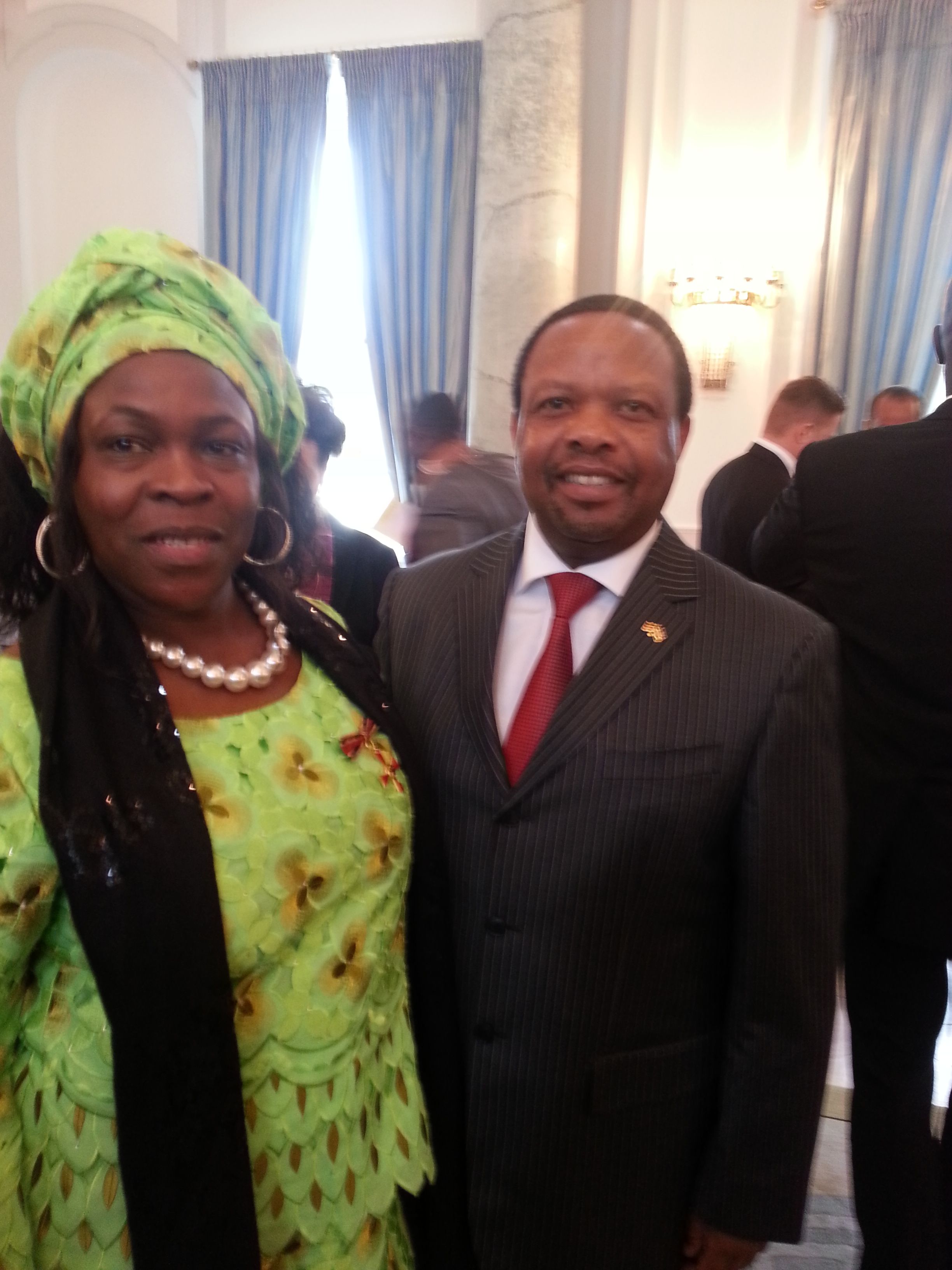 The function, hosted by the German Federal President on 24th May 2013, marked the 50th Anniversary of the African Union.

H.E. Ken Osinde with Ms. Wangari Greiner, a Kenya Diaspora serving on the Advisory Council to the Federal Presidency and Chancellor on Integration.

H.E Amb. Ken Osinde with other members of the diplomatic corps in the event organized by the Federal Government to Commemorate the 50th Anniversary of the African Union on 25th May, 2013. 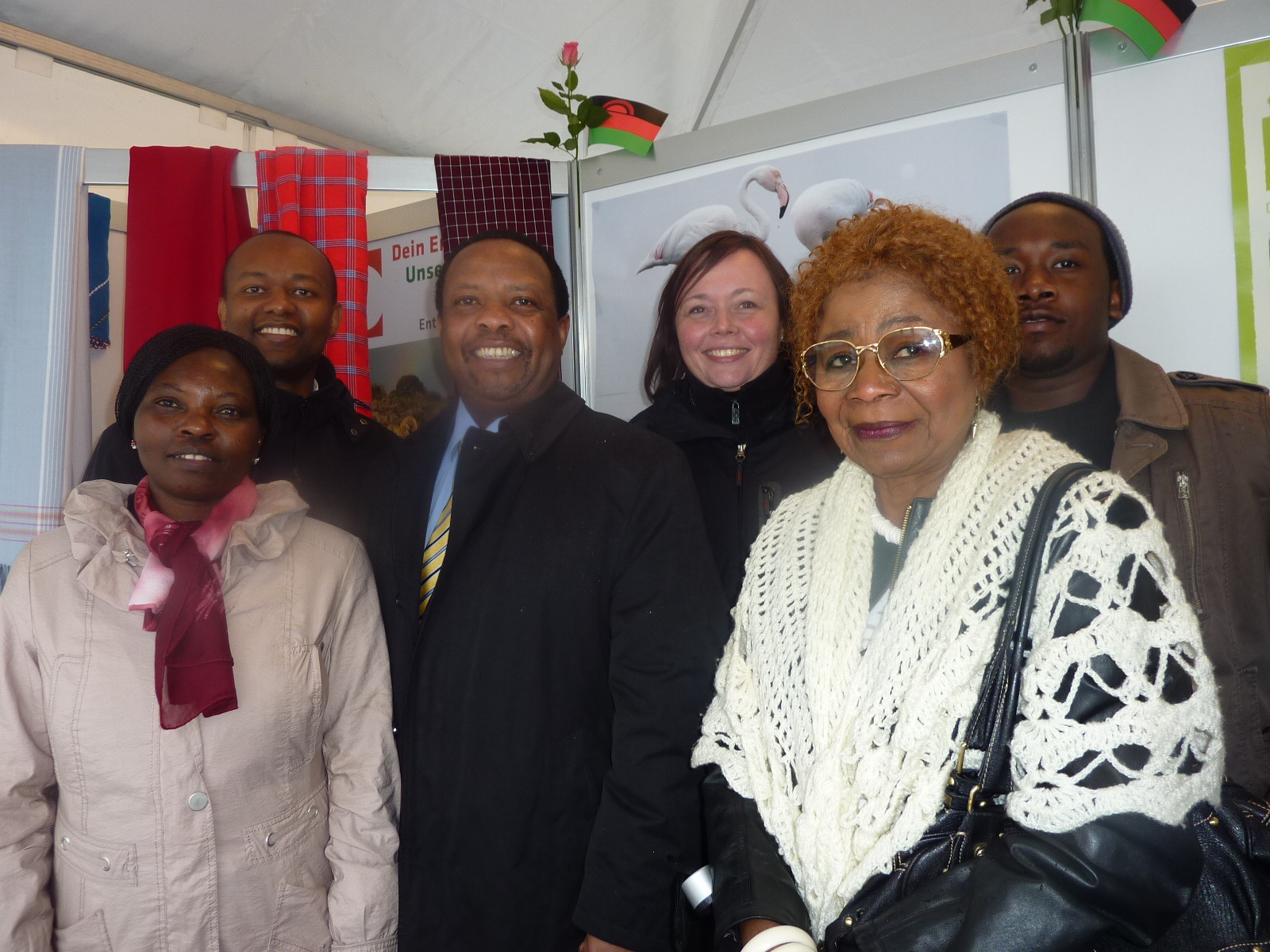 Members of the public were treated to a wide range of exhibits by various countries as well as organizations active in development co-operation during the German Development Day 2013.

H.E. Amb. Ken Osinde poses for a photo with Embassy Staff at the Kenya Stand during the event on 25th May, 2013.

The “Africa – An Economy Poised for Takeoff” Conference

The Conference was held in recognition of the 50 Years of African Union and was sponsored by the German Chamber of Industry and Commerce (DIHK).

The “Africa – An Economy Poised for Takeoff” Conference was held on 27th June, 2013, in Berlin. The event brought together key figures from the public and private sectors. It was officially opened by Mr. Dirk Niebel (Federal Minister for Economic and Technical  Cooperation) and the key note speech was given by Prof. Mthuli Ncube (Vice-President and Chief Economist of the African Development Bank). Kenya was represented by H.E. Ken Osinde, who gave a vote of thanks on behalf of the African Ambassadors in Berlin. Others in attendance were: Mrs. Rosemary Owino (Minister-Counsellor) and Mr. Oliver Konje ( Commercial Attaché). 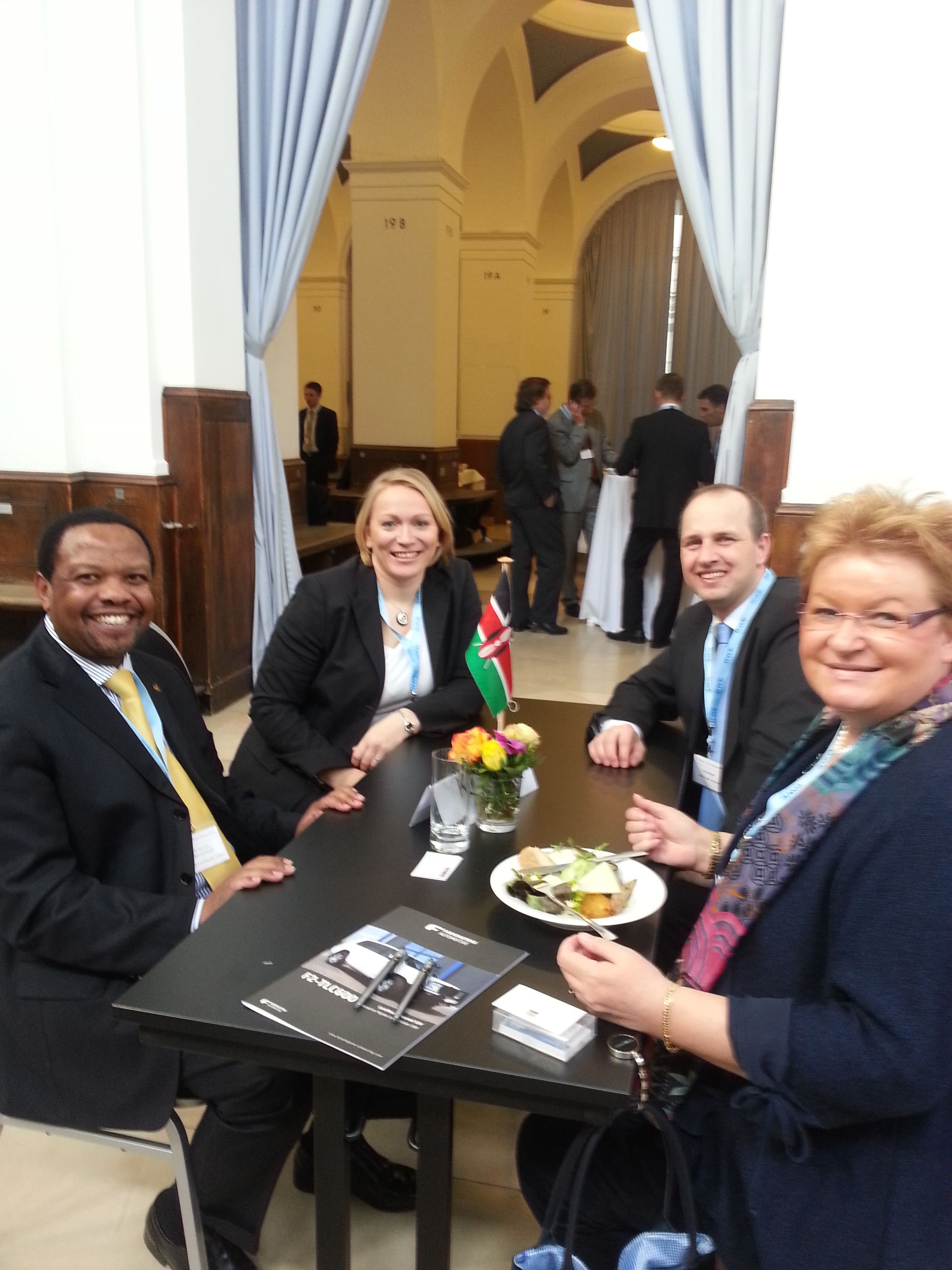 The Forum, held from 7th to 10th April, 2013, focused on energy, ranging from oil and gas to conventional power and renewable energies. 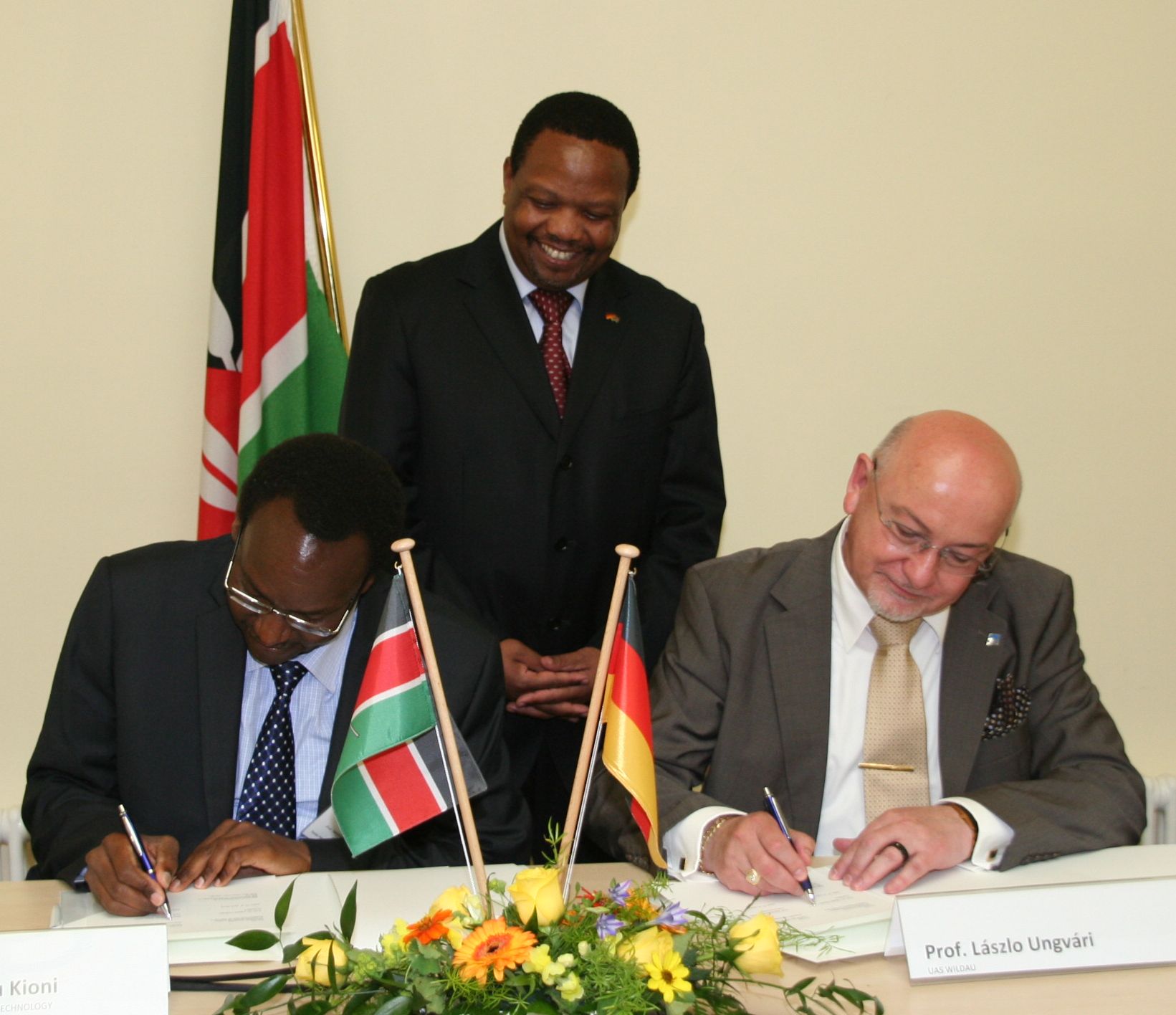 Members of the Academic Staff of Dedan Kimathi University of Technology, Nyeri, Kenya, led by their Vice-Chancellor, Prof. Ndirangu Kioni, visited Germany from 2nd June to 9th June, 2013. During their visit, a co-operation agreement was signed between the two Universities.

Members of the Academic Staff of Dedan Kimathi University of Technology and the Technical University of Applied Sciences, Wildau, at the Embassy Chancery

The purpose of the visit was to brief H.E. the Ambassador on the Co-operation between the two Universities. 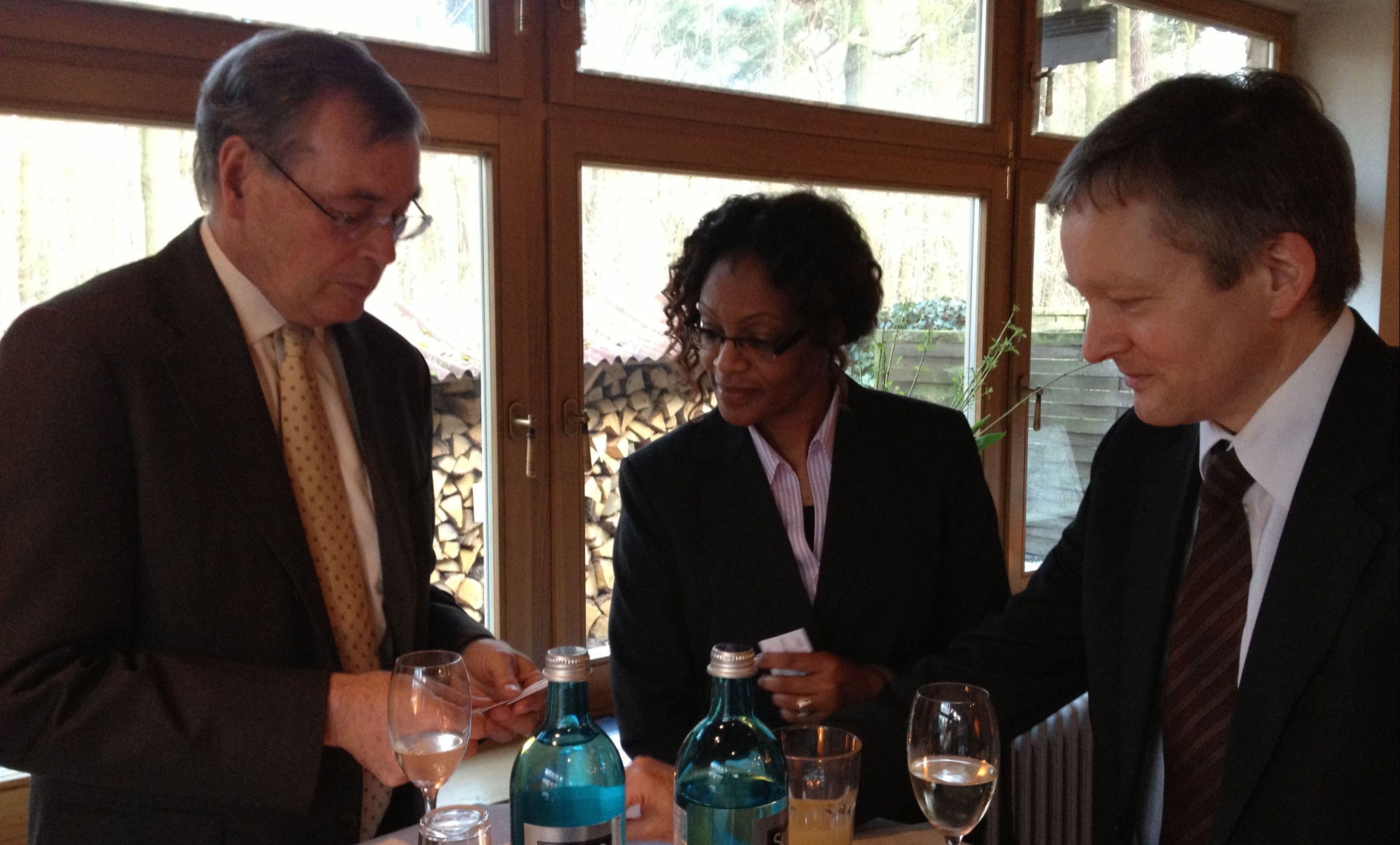 This is an annual meeting of commonwealth diplomats based in Berlin.

Visit by the Auditor General to the Kenya Embassy Chancery 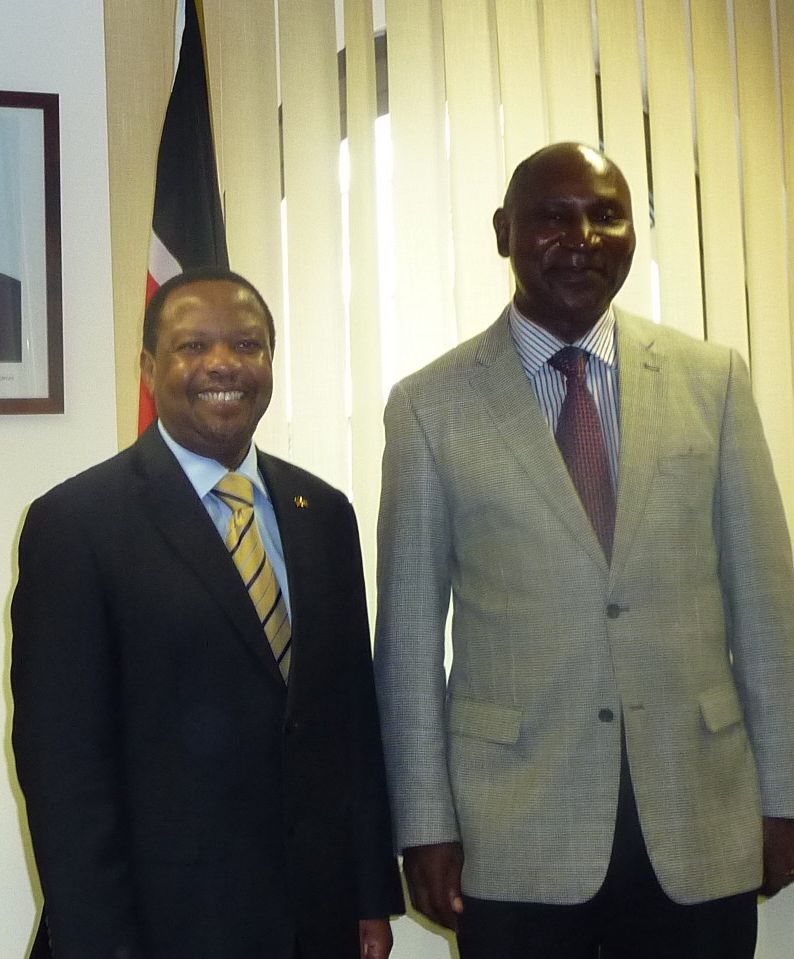 The Auditor General, Kenya National Audit Office, and his team were on a benchmarking tour in Germany. The visit was sponsored by the German development organization, Gesellschaft für Internationale Zusammenarbeit (GIZ). 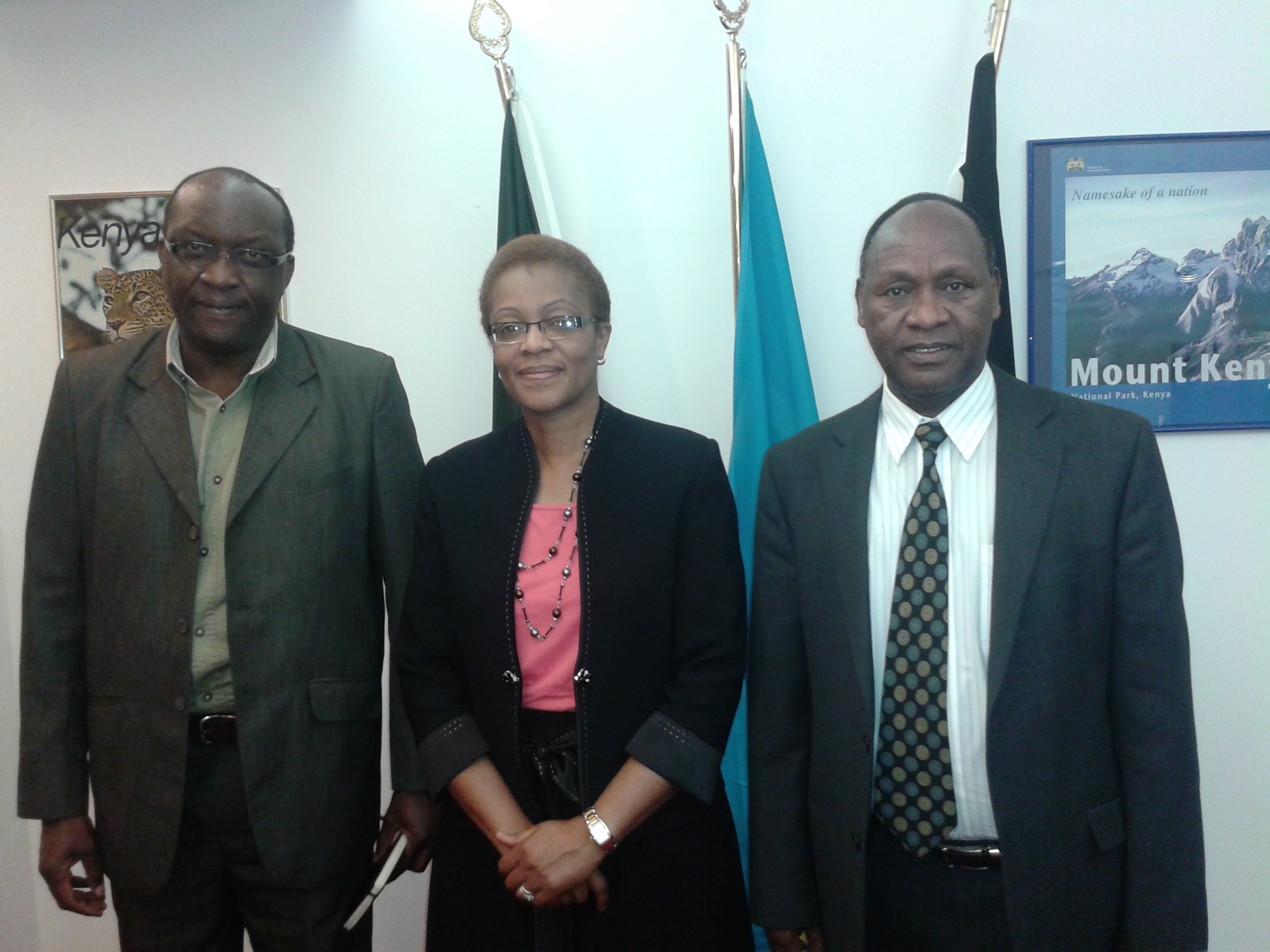 The Deputy Secretary General (Political Federation) led a delegation to an International Conference in Berlin entitled “Perspectives of China, India and Germany in East Africa” at the Federal Foreign Office, Berlin, on 24th June, 2013. 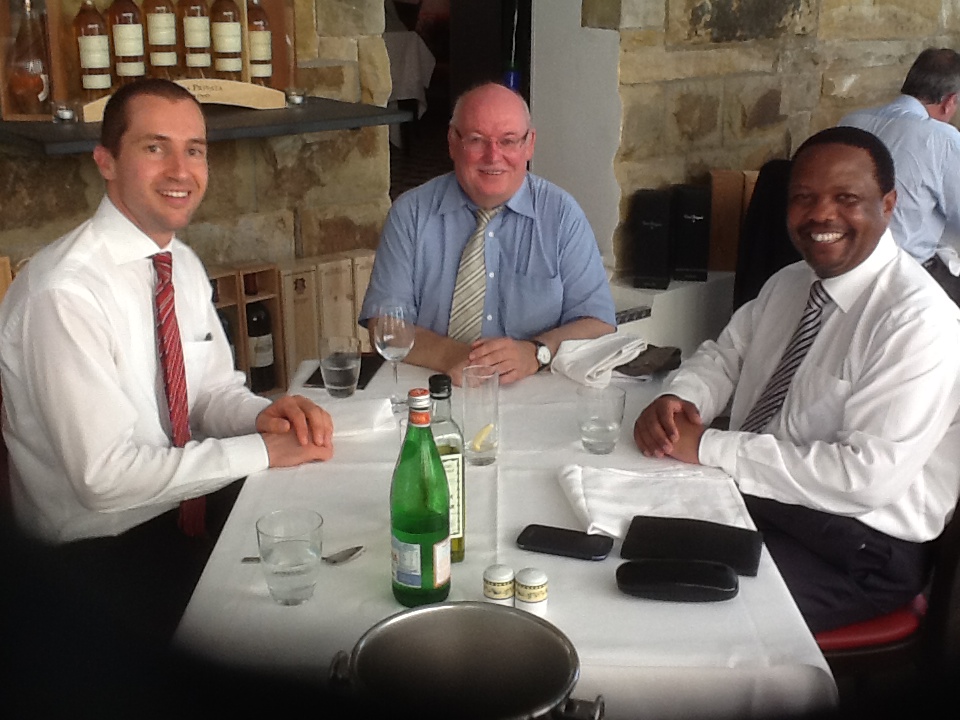 H.E. the Ambassador visited the Federal Ministry For Economic Cooperation And Development (BMZ) in Bonn, Germany, for bilateral talks touching on the forthcoming development cooperation negotiations between Kenya and Germany.

Meeting with the Kenyan Diaspora in Frankfurt (am Main) 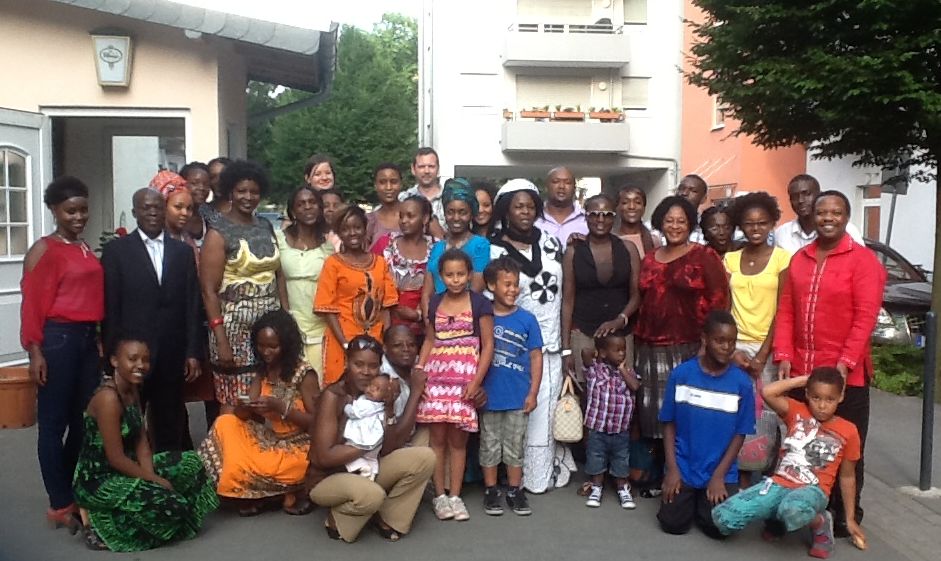 H.E. the Ambassador met Kenyans living in Frankfurt, Germany, after attending the “Effects of Violence on the Health of Women” Conference and the Kenyan Diaspora Meeting on 13th July, 2013. 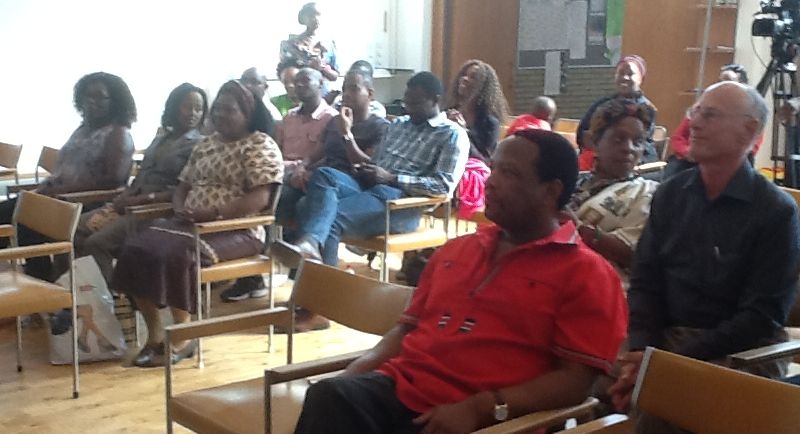 The Meeting, under the theme “Pamoja: 50 Years of Independence” was graced by H.E. the Ambassador. He advised the Kenyans in Diaspora to be actively involved in building Kenya by investing back at home.

H.E. Ken Osinde at the Diaspora Consultative Meeting in Cologne on 12th July, 2013. 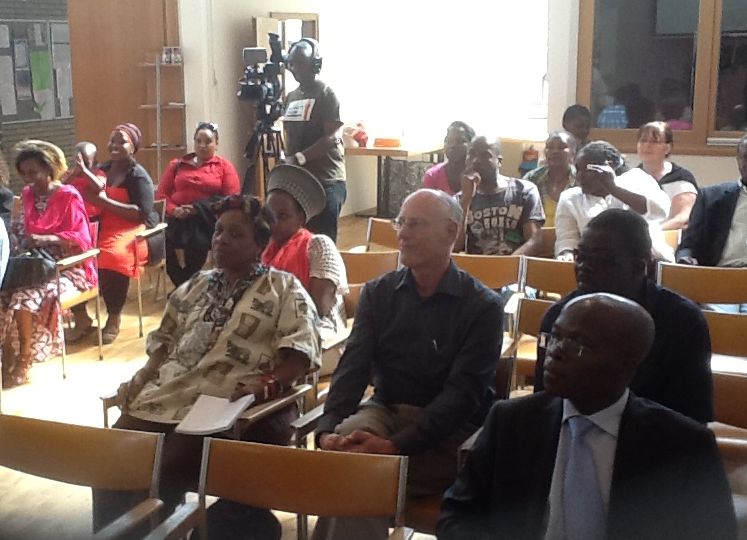 The Head of the Consular Section, Mr. Wilfred Wamela, during the meeting, explained issues on processing of Passports, emergency travel documents, as well as other consular matters affecting the Diaspora.

Mr. Wilfred Wamela at the Diaspora Consultative Meeting in Cologne on 12th July, 2013.

Embassy of the Republic of Kenya