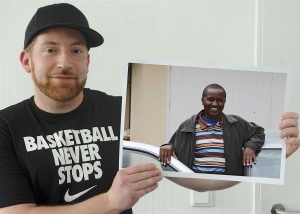 Remember the Kenyan taxi driver from Nairobi who called Germans impatient racists who don’t give enough tips? (Read the story: A Kenyan driver’s view of the Germans) Samuel also pointed out that he respected German engineering and would love to see the “hanging” rail (Schwebebahn) in Wuppertal.

This caught the interested of a native Wuppertaler, Jens Abbigrata, who started up a cause to bring Samuel to Wuppertal to come and see the rail. (Read about that: The Kenyan Driver to get a ticket to come to Germany)

Now exactly after Jens started up the idea, Samuel is finally coming to Wuppertal. After drama with the Embassy in Nairobi and the officials in Wuppertal, Jens cause has finally paid off.

Samuel arrives in Wuppertal on the 4th of July.

Anyone interested can keep up with the the activities on their facebook page, Wir laden Samuel nach Wuppertal. Samuel will later on be visiting his cousin in Berlin. (Remember the cousin is the one who was telling Samuel about how sometimes black foreigners are left hanging by German waiters?)

Kenyan Group from Malindi Enjoys a Canoe Ride on the Eider

Government to Take Away Independence of Universities in NRW