I got this mail a while back but never read it, and when I finally read it, it was during the Easter weekend and just for respect decided not to post it then. Apparently there was this Afro-German, as they say German with African “herkunft” or roots who has been receiving racist threat letters from neighbours in his appartment. He has reported the issue but not much has been done and now the PanAfricanism Working Group Munich is demanding for the police to handle it. Here is an example of the threat letters the guy was getting. If you’d like to be involved in the issue more or to read about the specifics click here to visit the AKPM page and know what they have done so far.This is scary, and I urge all of you with dark skins like myself to be careful….

English Translation of the letter Below:
African Primates – Nigger!- are unwanted in this house, in this district/Estate, in this town, in this Country and on this continent.
Your final return to Niggerland is planned for the 20.04.2012. Be prepared. 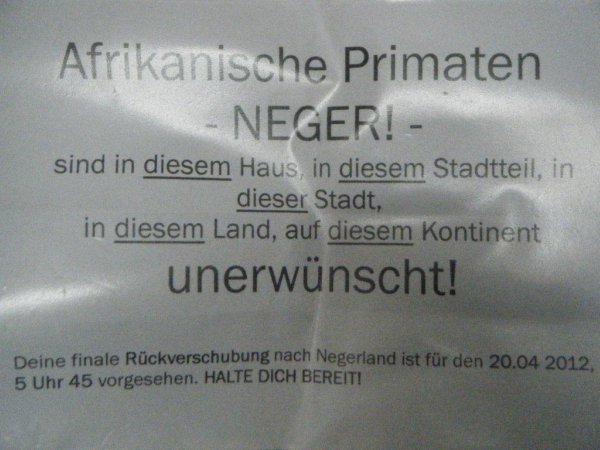 Challenges of being a Black student in an All German School