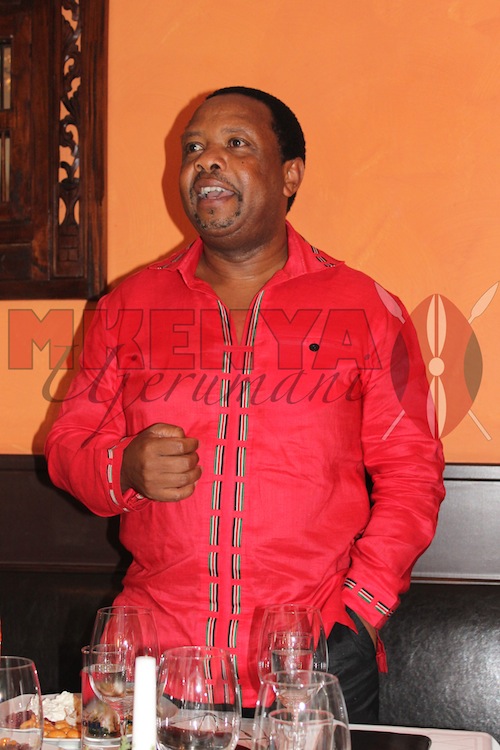 The dinner with the Ambassador was hosted by Wangari Greiner of Maisha e.V. The dinner was preceded by an event organized by Maisha on “Impact of Violence on Women”, the event was very informative and I hope more people can attend such events and learn from all the information that is shared at such events. (I’ll do a separate article on some of the things, I picked up at that event).  The event on Violence was opened by the Ambassador who gave the first speech.

The Ambassador first took a minute to appreciate the attendance of Kimberly, who was the youngest Kenyan at the meeting. Kimberly was in the company of her mother, Betty.

The dinner was in a cool relaxed atmosphere at a Greek restaurant in Frankfurt. The Ambassador requested that we start the meeting with a prayer, which was led by Esther, before he could take the floor and share what he had.

Our hostess for the day, Mrs Greiner, welcomed the attendees and the Ambassador.She also spoke briefly on the topic they had handled during their event. She called for all of us to take violence seriously because violence had no face and anyone could be in such a situation.

The Ambassador began by making remarks about the event that had preceded the dinner. He asked that we seek a cocktail of solutions to solve the problem with domestic violence and not run towards taking karate lessons without exercising other options. He also noted that although most of us onyl speak of rape and assault as violence, there are many other forms that are affecting people, namely: economic starvation, verbal and psychological abuse.

He encouraged the Kenyans to support other Kenyans who were doing notable things in the soceity and not only financial support but even simply by attending such events and giving moral support. “Good things will always be opposed, but never be discouraged”.

He insisted that we should love our country; network amongst ourselves and join one another’s efforts. With the 50th anniversary, the Embassy in Berlin is looking to network and consolidate the gain made by our country and citizens so far.

The new government is encouraging the diaspora to look home, and many of us have with our remittances but those don’t always go as planned. Many Kenyans have been sending money to finance projects that turned out to be ghost projects despite having received pictures of the “progress” when they sent the money.

The diaspora should look to invest in things that will help people in Kenya while putting aside wealth for you. He gave examples of investing in Greenhouses or biogas digestors or even technology to cut sukuma wiki. He encouraged those interested to start small. The Embassy also offers help on “How and Where to Invest in Kenya”.

“Hustling to survive is ok but remain focused na utatoboa”. Investing in Kenya isn’t reserved for the rich but every single Kenyan can invest back home if interested. Even hustlers should look into investing back home. The Embassy will be organising a Business Forum on 5th December in Berlin to discuss investment opportunities in Kenya and Germany. The forum will aim at getting Kenyans who’ve already started businesses and lived in Germany networking with other business people as well as with others who might be interested in doing business.

“Do not ask what your country can do for you, but what can you do for your country?”. We should further the spirit of sharing amongst ourselves. The government is not in the business of doing business but in governance and facilitation. The only way we can improve how we do business is through learning from one another and not waiting for the Embassy.

We have to be faithful, respectful and truthful to what we’re doing. We should stop petty politics that keeps us from getting to where we’re going. You don’t have to be lovers to do business with one another but should have mutual respect. Those planning to do business in Germany should understand the rules of engagement, be honest and ensure they can sustain the supply once they receive an order. Conning potential business partners will spoil for the honest ones.

He iterated that the embassy is willing and open to meet with Kenyans all over Germany but those with events and would like the embassy to attend should send the invitations on time and avoid duplicating and/or sabotaging events they already know the embassy will be attending.

He also spoke of the umbrella body, the embassy is working towards building. The body will consist of 2 representatives from each city. Those interested can call or email the embassy and inform them of their interest. The body will manage and organize the diaspora events planned by the embassy. These events should be for us and by us.

Lastly, the Ambassador closed with the words. “Good ideas can be killed by pettiness”.

Mr. Wamela was welcomed to explain the functions of the consular section (find that in a separate article)

Mkenya got to introduce Pamoja to those who were present and we encouraged them to own the events. Those interested in joining the Frankfurt team in planning for the celebrations, can meet the others 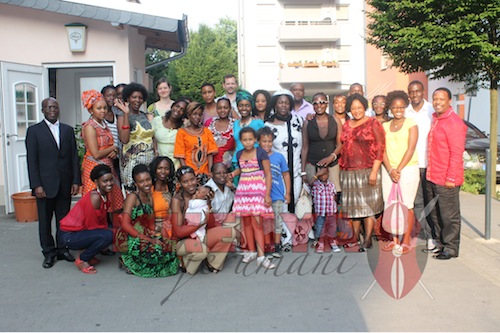