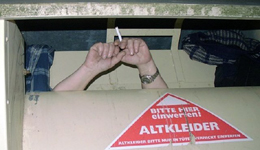 So this guy in Neumünster in Schleswig Holstein had collected all his old clothes and decided to share with the less privileged. So he put all of them in a bag and headed to the nearest old clothes container. On getting there, like a good citizen he removed the clothes from the bag and put them into the container. When he was done and was ready to go home, he realized he had added an extra offering that he didn’t plan to let go of…..his phone.

He panicked and decided to go after his phone. He opened the container lid and got in. Unfortunately he hadn’t calculated how he’d come out. After finding his phone, he finally got to his senses and had to rethink but it was too late. He couldn’t get out of the container.

Fortunately for him, he had his phone, so he called the fire fighters to come and get him out. The brigadiers came in fast and saved the man.

10 Tips on Preparing for a German Job Interview

Meet Kenyan Techies and Entrepreneurs at the re:publica in Berlin

7 Things to Consider BEFORE Investing