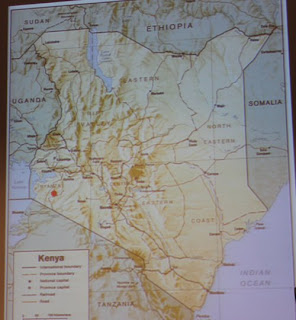 The countdown is on: the Kenyan general elections are around the corner. One would think that being abroad would make one ignorant of what is happening back home. However, the opposite is true; internet and  mobile technology makes news travel faster than any of us can say ‘habari’ or sasa depending on your age.

I vividly recall the aftermath of the 2007 elections and I can’t help worry.
Leading to the elections I couldn’t help wonder why we were so divided, and by we I mean the diaspora here in Germany and elsewhere. A friend in the US had started a blog and you can never imagine the insults that were exchanged in the name of politics. It was enough to know someone’s opinion just by looking at their surname which as we all know denotes our tribes. Never mind that a lot of the participants I knew of were PHD students. I have however come to realize that it takes a certain character (education not withstanding) to accept differing views:  in life, politics, family life, religion, sexual orientation etc. Being from the X tribe, it would have been expected of me to support my tribesman at the time but I was indifferent and I thought: may the best win. My indifference however was assumed to come from being settled abroad and forgetting where I came from. On the contrary, I was keenly following the elections but too lazy to dig deeper on the facts and support the ideal candidate based on facts.

This attitude however did not endear me to some of my X tribe friends. I recall being told off by a few and one even got nasty as we were chatting where she even told me, ’you people in diaspora are just ignorant’ or something to that effect. Sadly to say the rant she delivered via chat ended our friendship. Then came the election results and I clearly recall where I was when I got the news that all hell was breaking loose. I was in a long distance train that seemed to take forever.

My dad sent me an sms and informed me of the situation but being the optimist that he is I knew he was downplaying issues. I couldn’t wait to get off the train and go consult Mr Goggle. Back then there were no Smartphones , FB, twitter, Whatsapp and all the social media. As I completed the train ride I couldn’t help recall the political blog, chats and talks I’d read and/or participated in. Was all the negativity a harbinger of things to come?

The online news and pictures were graphic and scary to say the least. To make it worse everyone thought they should ask my opinion or rather clarify on what was happening. Attending seminars became a nightmare as I was now supposed to be a source of news or rather unbiased news untainted by the western media, to quote one professor. I had always taken it for granted that Kenya was the peaceful island among her warring East African neighbors. Suddenly Kibaki was sworn in as president and while that is an issue for political analysts to analyze I wanted it over and done with. I wanted peace, my nights were sleepless but I was comforted by the fact that my family was safe. I resulted to avoidance strategies: I hardly checked online news but I learned that I could run but not hide. Everyday when was  logging onto my Yahoo email the first news were on Kenya. Then there were all the email forwards from my non Kenya friends. I wondered how Europeans, Asians etc got hold of these but as they say it’s a small world.

I recall wondering if my best friend (from tribe Y) would continue being my friend. I ‘d been brought up having no prejudices and I recall my dad telling me no one should fight their neighbor over a political opinion. ‘Whatever tribe the said politicians are they mostly by-and-large serve their own interests,’ he’d said. I emailed my friend who replied saying that she was offended that I’d insinuated such as thing and she went on to reassure me that we were friends irrespective of the tribal politics. Later on another tribe Y friend emailed a bunch of us and assured us of long-lasting friendship inspite of what was happening on the national scale. I must however admit that I only believed my best friend when I went back home( Kenya) and I’m glad to say our friendship has  remained strong.

Sadly just like in 2007, I won’t be able to vote this year. I must however share a few experiences I had a few weeks back when I went home. I recall visiting an auntie and she had a guest I’d never met. As usual political talk was the order of the day. To make his point the guest turned to me and said,’ I’m sure that you have no friend from tribe Y’, taken aback I replied ‘my best friend is from tribe Y’.  How embarrassing for him but I was laughing inside me.

Occasionally I wanted to find out from a few of my X tribesmen why they supported politicians who may have to appear before the Hague tribunal. I generally got the reply that, ‘politician so and so stood for us otherwise we’d have been wiped out’.

Politics, tribe and wealth will undoubtedly for a long time continue to play an important role in Kenyan politics.  I may not have a vote but I’m silently rooting for all those ‘political lone wolves’ who have a defined vision but without a large political base. A friend told me, she will vote one of them in even he/she has a remote chance of winning as she will be exercising her democratic right. Maybe like other advanced democracies we will one day vote based on the political parties’ agendas and vision. I do hope however, that this will happen during my lifetime.
This time round I’m wiser and engage in almost no political debates. All I want is: peaceful elections, continued political and economic development for my beloved country. I cannot help wondering what the exchange rate of the euro will be, come March 24th and how the Arab revolutions have affected the thinking of Kenyans at large. May we all have the sense in this era of social media  to vote peacefully, accept whoever wins and most of all that the losers immediately  concede defeat.

When a LUO man MARRIES a KIKUYU lady…..Food for thought

The problem with African “rich lists”